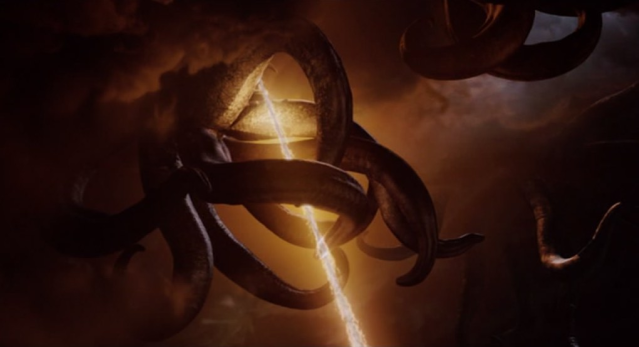 Fire fell from the heavens like rain pelting the earth relentlessly as the fabric of the universe frayed and fractured. Darkness swallowed the sun leaving the sky black as night cast in hues of crimson and gold. Cries and shrieks rose like incense off the city amid the sudden chaos.

Coven, covered head to toe in blood and wearing nothing but the strange archaic symbols  he had carved into his flesh, giggled like a madman high upon a cliff overlooking the city below. In one hand he clutched a book bound in human flesh; in the other hand flashed a serrated dagger made of meteorite. In the dagger’s pommel an eye like that belonging to a goat blinked and looked about excitedly.

Blood covered the earth beneath his feet where he stood in the center of a pentagram formed from the broken bodies of his victims. The stench of blood, excrement, and decay wafted from the bodies. It had taken him months to assemble the right sacrifices.

Around the globe the earth shook and split open. The sky fell in great downpours of fire and brimstone. The Apocalypse, the mythic end of all things, descended upon the living as writhing tendrils forced themselves through the fabric of time and space, and hell spilled open.

Coven held his arms outstretched ushering in the annihilation promised by the return of beings remembered only in the primal fears etched into the DNA of man; beings uttered in the fragmented gibberish of the deeply disturbed.

“Coven!” Gwen was covered in the debris of the forest. Pine needles and dried leaves clung to her black dress. Mud caked her boots and there was a gaping tear in the sleeve of her leather jacket. Rips along the hem of her dress, and the smudging of dirt along her porcelain skin, indicated she had fallen several times running through the forest in search of Coven.

The smell of death was overwhelming. She held a sleeve covered hand to her nose gagging. Tears streamed down her face. She rocked on her hips and bit her bottom lip in hopes it would keep her from breaking down into uncontrollable sobs.

His wild laughter stopped in his throat. His arms dropped and dangled at his sides tightly holding their contents. He cocked an ear behind him. “It’s beautiful, isn’t it?”

“Coven.” She choked back sobs. “W-what have you done?”

“Justice, Gwen. Justice.” His voice was soft, distant, barely audible over the explosions in the distance.

She squeezed her eyes shut, ran a hand through her pixie cut coal black hair, and cradled her head against her shoulder. Dropping her hand from her mouth she wept choking out, “W-why?”

Graceful, slowly, like a pirouetting dancer, he pivoted to face her. For a moment he closed his eyes and breathed deep the decay. His green eyes fell upon her. Once they beheld her with passion and love, but now they were devoid of all feeling for her.

Gwen recoiled stumbling over her own feet. She hit the ground hard. Her sobs came harder and louder against her will. Her world, literally and figuratively, unraveled before her eyes. Dreams and hopes for a future with Coven gone.

Lightning flashed ushering in a deafening crack of thunder. The earth beneath them trembled and quaked. Coven lost his footing, falling to his knees. His giggling louder and out of control. He bubbled with joy resting his head on the badly decayed corpse of an elderly woman.

Gwen pushed herself into a seated position. She steeled herself pushing down the sobs. Fire raged in her heart. With her eyes she bore holes into the man nuzzling his face against the dead woman. “What have you become?”

“Become?” He looked up at her. rising to his feet as the trembling earth stilled. “I am GOD!”

“Look what I have done, Gwen! Justice!”

“Gwen,” he struggled against a fit of giggling, “I did what God could not.”

“You’re insane.” Disdain dripped like venom from her words.

“No, darling. I. Me! I solved the great dilemma! I have solved the problem of evil!”

“By killing us all?”

“If none are righteous, then all are unrighteous! All are rife with sin! All are guilty! The world wanted a god who would eradicate evil, and I have done just that.”

“There are no innocent, Gwen. Innocence is a lie.”

“So now what? Now that you’ve destroyed mankind, what are you going to do now?”

“Leap into the abyss.” Coven stepped back with each word. His heels hung over the ledge of the cliff. He stretched his arms out, palms towards the falling sky. “Don’t be afraid, love. You can’t die when you’re already dead.” 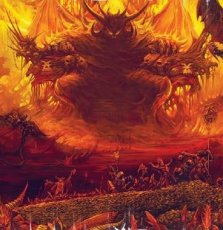 He closed his eyes, shook his head, and bent his knees slightly.

Curator of the strange and incredibly awkward. A rambling writer with the misguided notion he has something to say. His only redeeming qualities are his wife and children.
View all posts by St Basil Z Fish →
This entry was posted in Uncategorized and tagged Apocalypse, Chaos, Fiction, Flash Fiction, Forces of Chaos, Horror, Last Day, Slice of Life, Writing. Bookmark the permalink.